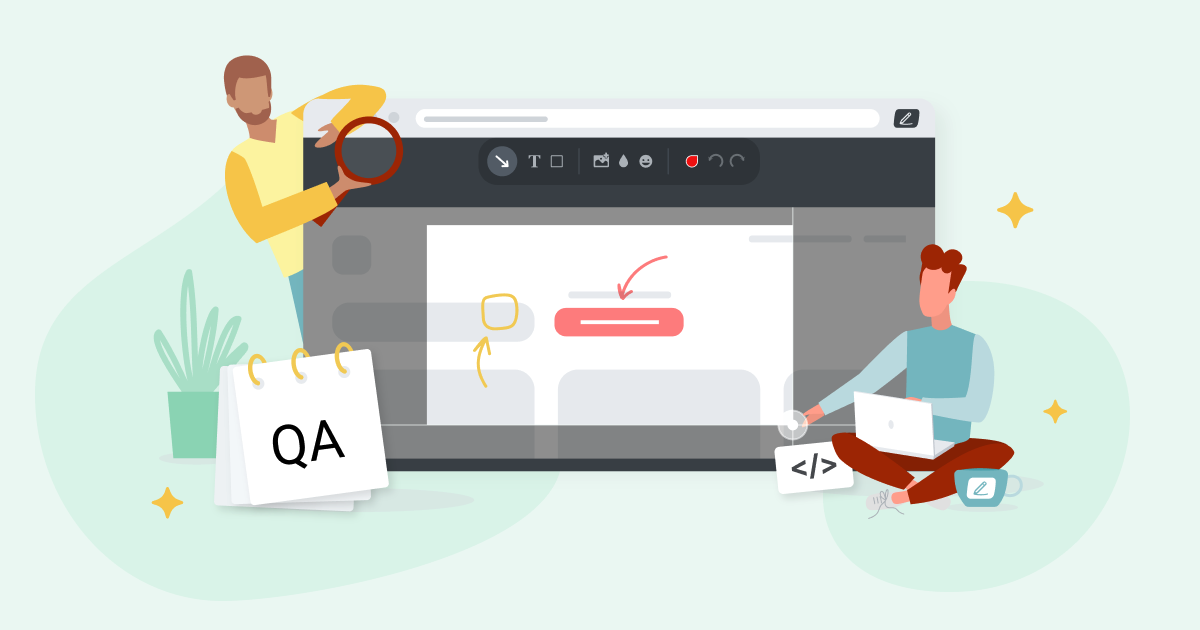 Visual Feedback - Where It Fits in Your Website Testing Toolkit

Website development testing is a multistep process that checks various processes before a site goes live.

Today's web applications are more complex than ever. As developers add more lines of code, it's important to check for bugs and errors that impact the user experience. It's also much easier to fix a problem before a site goes live. According to one study from the University of Cambridge, developers spend 50 percent of their time fixing bugs to the tune of $312 billion each year.

In other words, companies can save a lot of money by testing and retesting before launch. Getting the whole team on the same page — at every stage — with a visual feedback tool can help.

Gathering visual feedback is a big part of website testing. Let's take a look at the various stages of web testing and see where a visual feedback tool like Marker.io fits in.

Functional testing is typically done by a quality assurance (QA) testing team that reviews the website's source code. This type of testing involves a series of steps:

To work through these steps, QA testers typically set up a simulation that resembles actual site usage as much as possible. Marker.io makes it easy for QA teams and others to report bugs and issues using visual feedback. See the workflow Sheer Digital uses for QA.

Usability testing is like a marriage of functional testing and the user experience. At this stage of the development life cycle, developers want to see if a real user's experience of the site reflects the site's intended purpose.

As you might expect, usability testing can yield important feedback, as it has the potential to expose clunky and confusing areas of the software, app, or tool.

Creatives know that it's almost impossible to critique your own work. Whether you're a novel writer or website developer, your brain tends to overlook errors after you've spent too many hours inside a project.

This is why usability testing is such a critical step in the website testing toolkit. In many cases, real-life users can uncover bugs and functionality issues developers would have otherwise missed.

Logging issues can be a clunky process — especially because various testers have different ways of annotating bugs and issues. Marker.io eliminates the potential for confusion by allowing users to give visual feedback anyone on the team can understand.

Interface testing involves making sure the interactions that flow back and forth from the web server to the application server interface go off without a hitch. This testing process validates the communication between the two systems that transfer content between each other.

You want your website, app, or tool to look great on all types of browsers and devices. This is why developers perform compatibility testing.

Testing teams check for compatibility across various browsers, including different versions of the same browser. They might also install updates as a test to determine if an update compromises functionality.

In addition, testers also make sure the software, site, or app is compatible with various operations systems. This might involve carrying out tests on Widows, Linux, macOS, and more.

With so much of the internet transitioning to mobile, testers also typically run tests for compatibility on mobile devices, including iOS and Android.

Ragnheidur Gretarsdottir, Quality Assurance Tester at TripCreator, uses the Marker.io visual feedback tool to report bugs inside their web app and the annotation tools let her explain visually how the bug should be fixed. She says she appreciates that she doesn’t have to write down which browser she’s using with Marker.io.

How well does the website or software perform under various conditions? This is the gist of performance testing, which works a bit like test driving a car. In other words, it's a "kick the tires" sort of process. Basically, you want to see if a site can perform as intended under a variety of circumstances.

For example, testers often do load tests, which involves running the website against different internet speeds to see if it can handle peak use. They might also conduct stress testing to find out how far they can push a website or application until it stops working.

The best issue tracking software and bug trakcking tools to avoid any defect.

Discover the 15+ product updates we shipped in 2021 with Marker.io

Earn 30% recurring commission on every new paying customers you refer to Marker.io!