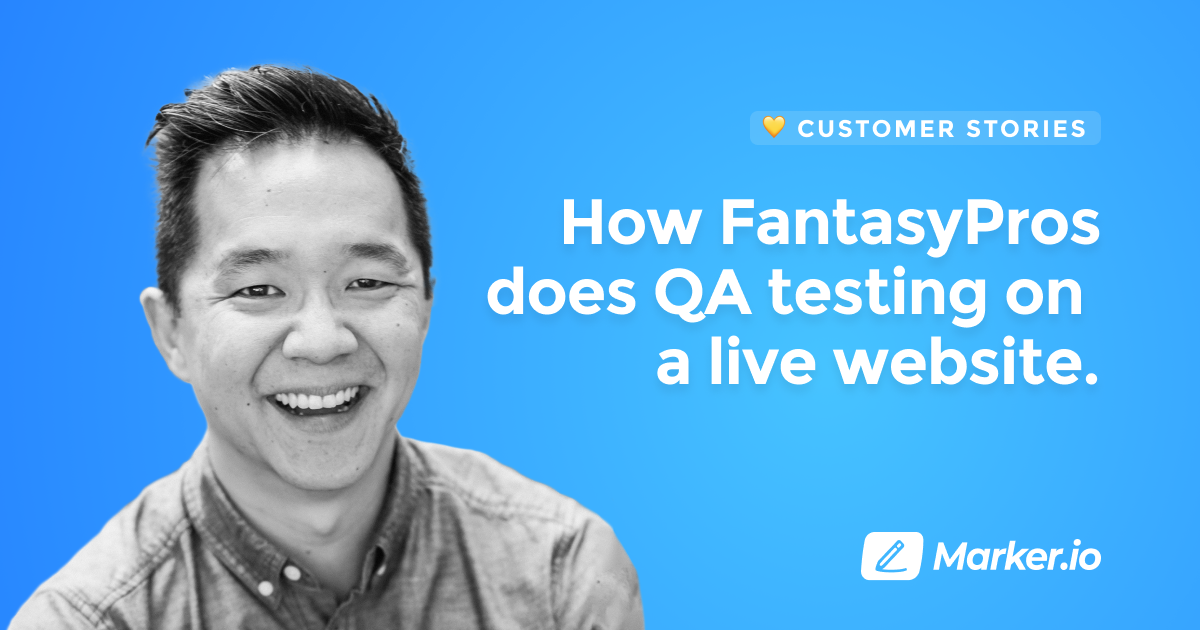 Andrew Hahn is a product manager at the popular FantasyPros website and they have been a long time customer of Marker.io!

FantasyPros has been fully remote since its inception in 2010, and tools that ease communication (like Marker.io) are used a lot. With 38 million annual visitors and 2.2 billion page impressions, fixing bugs needs to happen as fast as possible.

Andrew's team consists of QA testers, customer support and product marketers. They focus on getting any bugs on their website resolved as possible.

Andrew and his team have been using Marker.io for years now, and they have used it to build a large and powerful platform with multiple apps.

Before they used Marker.io, they did bug reporting the manual way:

So, Andrew went looking for something that made sense for their internal team. And that is when he found Marker.io

"Being able to capture device information right off the bat is incredible! Our developers, when we first started using your tool, were messaging me 'where's this coming from? How are you getting this information in there?'

Andrew and FantasyPros use Marker.io currently exclusively as an internal bug reporting tool, but there have been some experiments done. Opening the widget for just an hour or so to website users for new product launches, has yielded great results so far.

"We currently use it exclusively as an internal bug reporting tool, because of the amount of visitors we get and the speed of development. I did test leaving the new widget open for 30-40 minutes at a time, and the instant feedback that we got is amazing!"

Andrew is one of the most heavy users of Marker.io in the team, so he has great insights in how it speeds up the reporting process.

Since using Marker.io, this is the workflow of Andrew and his QA team:

But it is mostly Andrew's developers who love Marker.io.

A dev team that works that fast and creates so many new features and elements needs to shift gears quickly, and Marker.io is helping them do just that.

"When we just started using Marker.io, our developers were really surprised. They called me to ask where all this information is coming from (laughs), and with the upcoming additions of more tech information, they are going to lose their minds."

Because Andrew and the QA testing team knows that devs need all of this:

"Marker.io is the most efficient way to report bugs for your development team."

In Andrew's perspective, the emoji option is under-appreciated!

In his team, they use the emojis in the annotation tool to brighten the days of the developers.

"Because, for developers it is not fun to see that the QA team found 25 bugs in my project. So we'll add an emoji in there to add some levity to the situation."

It brings a smile to people's faces and keeps the relationship between testers and developers a little lighter.

When it comes to speedy reporting AND resolving of bugs, Andrew Hahn and FantasyPros trust in Marker.io.

Since they started using it, they have been enjoying a faster reporting and faster resolving of any issues. And with their large user base and many webpages and products, speed is of the essence!

Thanks for the interview Andrew and FantasyPros!

Lili van Belle
Lili is the marketing manager of Marker.io and a TEDx speaker. She combines her passion for great storytelling with a Master's degree in Literature and a deep understanding of human psychology.
Read more