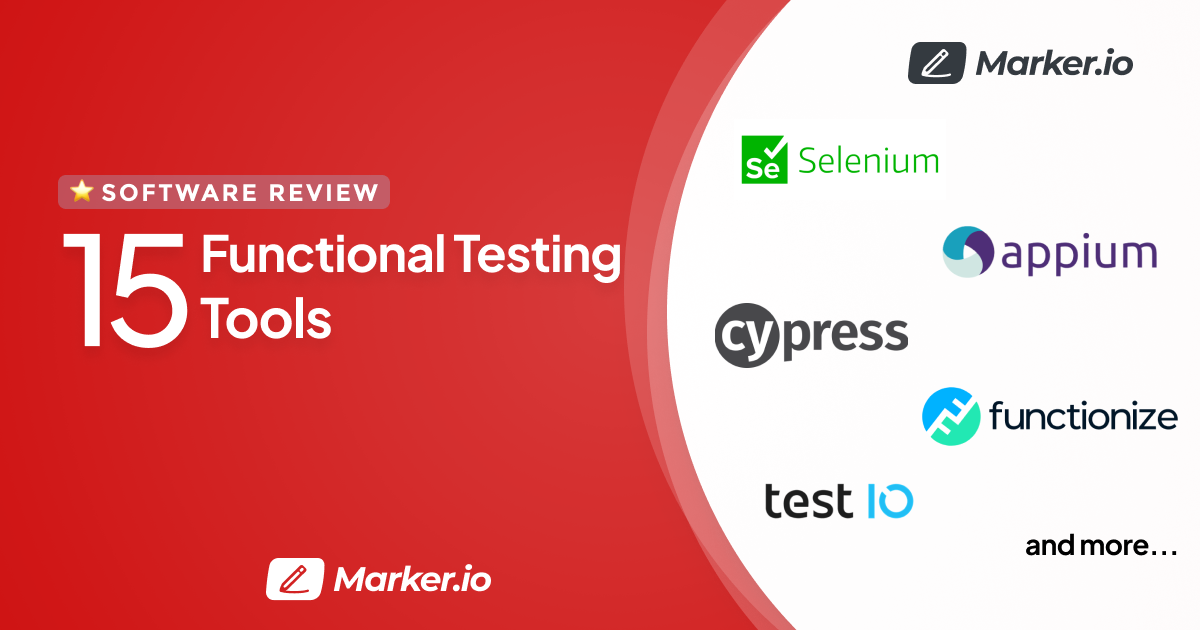 In this article, we compare the best 15 functional testing tools based on features, use cases, and pricing.

Functional testing is an integral part of your QA process.

When your team is developing websites, web applications, and software for dozens or hundreds of clients, testing gets complicated and time-consuming.

As a project manager or QA lead, you need to ensure that every website, app, and software product you sign-off on goes live with as few problems and bugs as possible.

And without proper functional testing tools, this task gets a little out of hand.

What is functional testing?

Functional testing is a way of ensuring that software and websites work according to requirements.

It’s a “black box” type of testing that verifies a website, app, or software works as expected, without bugs, slow load speeds hindering performance, and others. It’s an integral part of QA.

With the right functional testing tools, you can:

Let’s get into it.

The good news is, Marker.io does it all, making it an ideal functional testing software solution.

QA engineers need a clear understanding of the environment where any bugs occurred so they can implement the right fixes.

With Marker.io, all technical data is automatically captured with every bug report and sent directly to your PM tool.

You’ll get the following info with every report:

The last thing a QA team needs is to waste time trying to collect, prioritize, and assign feedback and testing results from numerous different channels.

With Marker.io, everything you need goes straight into whichever PM tool your team uses. Even when it’s clients or end users providing feedback.

You can rest easy knowing that you won’t be scrambling to pull together feedback from email, Slack channels, and notes after video calls.

Every bug report and piece of feedback goes directly into your PM tool of choice.

Two-way integrations mean that as soon as an issue is marked as “Done” in your PM tool, it’s also “Resolved” in Marker.io.

You can even set it up so the client or user is automatically notified.

No more endless back-and-forth via email. No more client feedback in spreadsheets or presentation documents. Both parties can keep in contact using Marker.io and via your PM tool.

Check out our 2-way sync in action:

Feedback is easier and more actionable when there’s a visual element.

2. Fill out a report and input details (it automatically captures environment info).

3. Click on "Create issue"—and the report is sent to your PM tool.

It’s as easy as: see a bug, click, annotate, and send!

Session replay provides a playback of the tester reporting feedback on your site—a way of time-traveling the last 30 seconds before a feedback form was submitted.

When you do functional testing with beta testers or non-tech-savvy stakeholders, it’s not always easy to replicate the exact environment where a bug or UX issue occurred.

The good news is, Marker.io's session replay tool does this for you.

All your QA team needs to do is click the “Watch replay” button on your feedback page.

We can clearly see this user journey:

Ready to give it a go? Sign up for a free trial here—no credit card required.

Appium uses the open-source WebDriver protocol to test how native, hybrid, and mobile web apps will function across iOS, Android, and Windows devices and environments.

Appium is another JS Foundation project (OpenJS), established by the Linux Foundation.

Cypress is a Javascript end-to-end testing framework.  It promises “fast, easy and reliable testing for anything that runs in a browser.”

You can run functional test scripts quickly and easily—and record your tests on the cloud.

If automated functional testing is what you’re after, this may fit your requirements.

Pricing: $695 per user/year, or $995/year for a concurrent license, with 2 Free licenses included

Pricing: You would need to get a quote, no public pricing available.

Kobiton promises an end to “abandonment issues”—users downloading apps and not using them.

The company is a market leader in automation and data-driven testing.

Agile dev teams and product managers can also use their suite to create bug testing data and auto-document their business process to improve product features.

Pricing: You would need to get a quote, no public pricing available.

Soap UI is the open-source version of ReadyAPI—a platform for functional, compliance, security, and load testing.

Here are a few of the features from Soap UI Open Source:

Tricentis is an end-to-end functional testing solution offering completely no-code software and the ability to deliver testing at DevOps speed.

Helix ALM manages requirements, tests, and issues with end-to-end traceability across your development and deployment lifecycle.

Test IO is a platform for running functional tests under real-world conditions across multiple environments simultaneously.

As part of the testing process, you can even recruit a team of human testers to evaluate your product (also known as crowd-testing, or Testing-as-a-Service). Alternatively, use their Test Coverage solution to test on a cloud platform.

ReadyAPI is the premium API testing equivalent of Soap UI Open Source, both of which are SmartBear products.

BrowserStack is the go-to for cross-platform test execution.

With BrowserStack, functional testing teams get access to over 3000 devices and operating environments at the same time.

TestComplete is another SmartBear product. It’s a solution for web, mobile, and desktop functional testing. It provides automated UI testing within a cloud environment.

Why use functional testing?

Functional testing is widely used because web developers, product managers, and QA team leaders need to verify and make sure software and websites work as expected in the wild.

It’s not enough to check that an app works fine on one or two versions of iOS and Android and hope for the best.

For the sake of your clients and end-users, you have to make sure—so that bugs and any other usability issues can be fixed during the development stage.

Functional testing, alongside other forms of UAT and QA testing, solves these problems and saves a lot of time and headaches down the road.

What is a functional test case?

The most common involve making sure that websites, apps, and software in development work with the extensive variety of environments they’re likely to function in once live.

The advantage of using functional testing tools is to accelerate and automate the process, and ensure no environment is missed from the testing workflow.

An example of this would be a new HR software solution being developed (a HMRS portal). The QA team needs to test whether the login page works, whether it’s secure enough, and whether the buttons on that page do as expected; e.g. cancel an attempted login, or help a user reset their password.

All of this can be assessed automatically across hundreds of environments with functional testing software.

Naturally, this is very time-consuming and most testing teams prefer to use software to automate the process.

Unit testing examines individual classes, components, and modules, and is cheap to run and automate using a continuous integration server.

Functional testing, on the other hand, focuses on whether an app, software, or website meets the business goals and objectives.

It’s a way of ensuring that a product works as expected for users.

What are the different types of functional testing?

These include the following:

And there we have it—the 15 best functional testing tools.

We hope you find this list helpful when choosing a functional testing tool.

Did we miss anything? Let us know on Twitter or via email!

Nathan Vander Heyden
Nathan is Head of Content at Marker.io. Before joining us, he worked as a growth & SEO consultant for various SaaS companies. You'll find him enjoying a cold Belgian beer or on a bike trip after a hard day's work.
Read more